After lobbying the Government for many years the double jeopardy law was successfully introduced. (Double Jeopardy Lawmeans that “The alleged criminal ” if accquitted, can be retried again if new and compelling evidence comes forward).

“In the pursuit of Justice” This following article was written by Nigel Hunt from the Adelaide Sunday Mail on April 12th 2009. We are now lobbying the Government to change the Propensity/Similar Fact Evidence Law into our legal system. (In other words prior convictions can be used as evidence against the alleged criminal) The Hon Dennis Hood (FAMILY FIRST PARTY) will be introducing this private members bill into Parliament…. will keep you posted !!!!!! 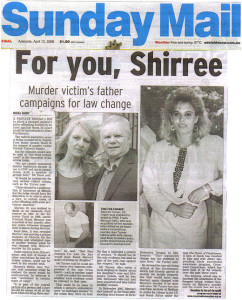 To help fight crime in our state, the government has raised the reward limit to $200,000. I cannot emphasize strongly enough that money should never be the motivation, but a sense of justice, good morals and values should be the only motivation to give information to the police department. 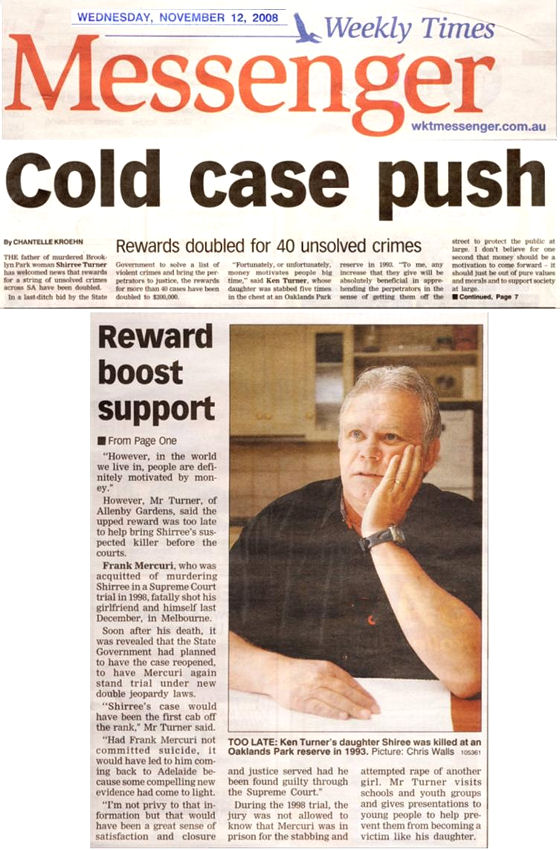 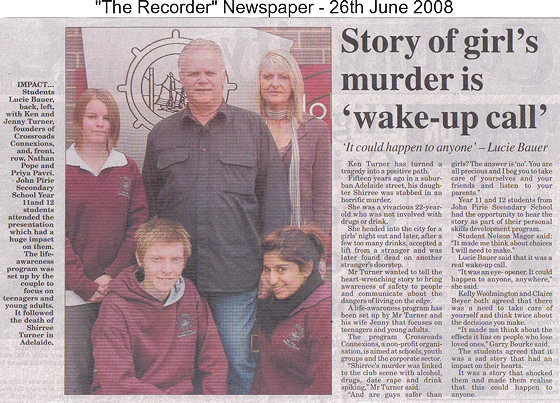 On the 23rd June 2008 we visited John Pirie Secondary School
and spoke to the year 11 & 12’s as part of their Personal Skills Development Program.

We had some very encouraging feedback, as quoted by one of the students…….
“I believe that hearing your case like that will have a lasting impact on the decisions I make”.

To be able to read the articles below you need to download this file (PDF 2.0MB) 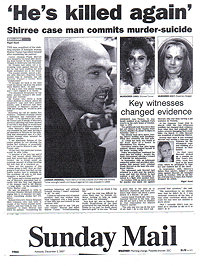 Nigel Hunt reported that Frank Mercuri who was acquitted for murdering Shirree has killed himself after murdering his de-facto Wife in Melbourne. We believe that if the propensity/ Similar fact evidence law was allowed in Shirree’s Case Rosemary would be alive today? 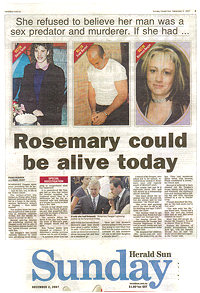 Rosemary spent years protesting Frank Mercuri’s innocence over the killing of Shirree only to die at his violent hands. She knew Mercuri was acquitted for killing Shirree, however he lied to her and convinced her that he was innocent, and very sadly it cost her, her life. 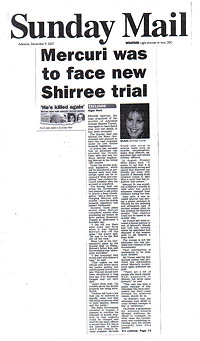 Frank Mercuri was going to face a new trial over Shirree’s murder after the government introduced a new double jeopardy law, this can only happen if new and compelling evidence comes forward. We don’t know what this new evidence was as the informant needs to be protected.

Double jeopardy dictates that a person cannot face trial twice for the same crime! However this will be changed soon! It has been done to modernize our law and to eliminate legal defects and to discover more effective ways to administer justice, and to maintain confidence in our criminal justice system.

I feel honoured that they were going to start with Shirree’s case first under these new laws. It makes me feel one hundred percent better about the justice system.

We will be challenging the Government to change the Propensity/Similar fact evidence law. ( Which means prior convictions can be used as evidence against the accused ) so this won’t happen to anyone else!!! 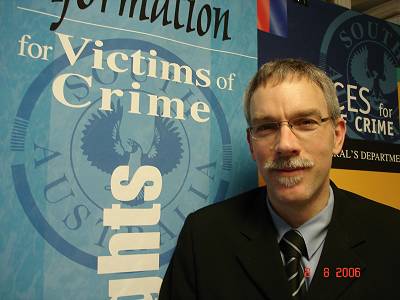 We were asked by Mr Michael O’Connell to speak to his students who are studying at TAFE for their diploma in “Justice Studies” which incorporated a session on Victimology.

It was a 2 hour session where Ken was able to share about the tragedy of Shirrees’s death and the impact the Crime had on himself, family and friends. There were many interesting questions from the students and also it gave him a chance to reflect and listen to their many concerns.

Some examples of their questions are as follows!

How did you feel police handled the situation when they told you the news of Shirree’s death?

Do you ever find because she was doing something that you didn’t agree with, do you feel anger towards her?

Did it change the way her friends behaved from that night on- Did they go to those places anymore?

Were you given any support services

Were Police calls to you during the ordeal a comfort to you?

You forgave! How did your son and ex wife cope did they forgive?

Do you believe he did it?

Where did it all fall down?

Do you think it was fair that the jury was not allowed to know what he has done in the past?

If you got a call tomorrow saying that they had more DNA evidence would you retry the case?

Is the file still open?

Michael finished the night off by quoting Sir Winston Churchill- Never Never Never give up! 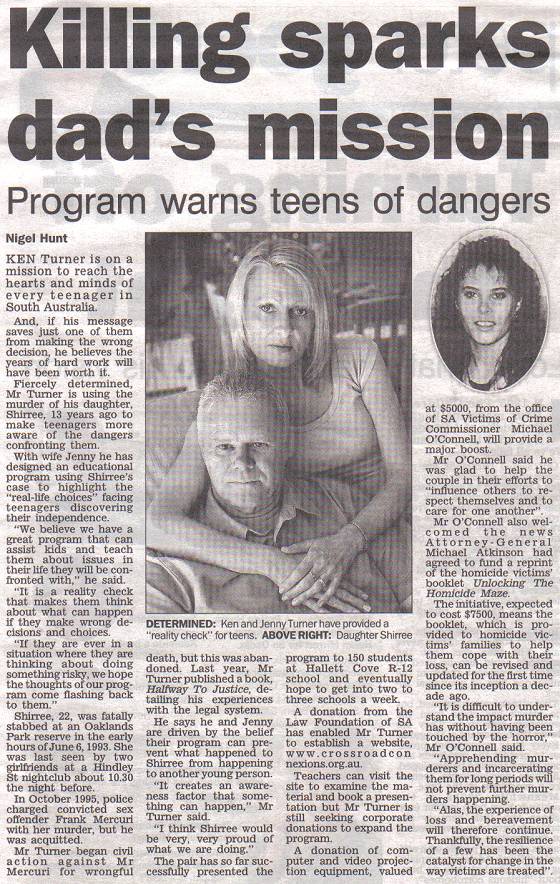 The above article was Published in the Adelaide Sunday Mail 31/12/06 by Nigel Hunt.

Since this article was published we have had an overwhelming response, we have received many emails and phone calls of support and numerous enquiries for speaking engagements.

Here is a example

“I remember the tragic story of losing your daughter, I have 2 children myself and get frightened daily by the terrors we face and the criminals that walk with us in this world. I believe this awareness of safety and crime is a very important message to us all. I do hope that the schools get behind you with your program.”

We thank all our supporters, without you this would not be possible.

Wesley Mission contacted us in Oct 06 about a series of documentaries they are producing for one of the major television networks, and asked me if I would tell my story about how I was able to forgive Shirree’s killer.

On the 26th Nov 06 Wesley Mission flew over from Sydney to film the documentary> We travelled to various places around Adelaide, filming parts of the murder scene and the cemetery, (which was extremely difficult for us to do)

Here are a few photo’s of the making of the documentary. STAY TUNED!!!!!

She first interviewed Ken on which she was given a copy of the book “Halfway to Justice:” which Sam used parts of the book for her assignment, and a few weeks later Ken presented the “Life Awareness program” to all the year 12 students at this particular school.

We have had some postitive feedback from the students and teachers alike.

One student quoted as saying “Thankyou for making us aware of the dangers that we face, now turning 18 and hitting the party scene, we know it has hit hard the girls who attended, so thanks”.

Another students response, ” The presentation came just at the right time as a year 12 student ready to ” Hit the scene” and I think I was a bit naive until I heard your story. it made me realise my negative attuide towards my parents going out was an over-reaction, they just simply care! 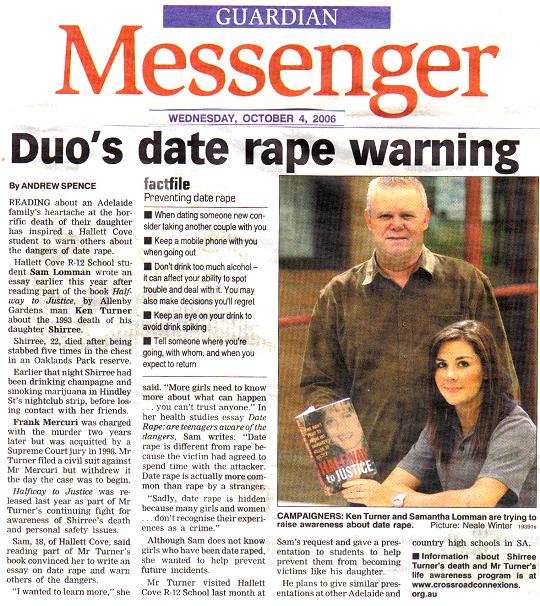 The following article was featured in the Yorke Peninsula Times and is reproduced with permission. This article is also viewable at their website.

Shirree Turner was a vivacious 22-year-old when her life came to an abrupt and brutal end at the hands of a stranger in a suburban Adelaide street 13 years ago. 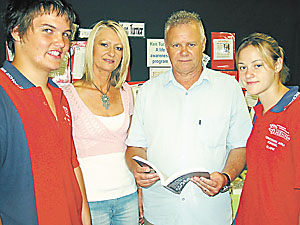 What led to her death, and the lessons to be learned, were the subject of a special presentation by Shirree’s father, Ken, to students at three local schools last week.

(Pictured on right: Yorketown students Matt Day and Clare Gutsche talk with Jenny and Ken Turner after their presentation of a copy of “Halfway to Justice” to the Yorketown Library. Students openly wept when listening to Ken speak about his murdered daughter.)

It was no soft sell, but a warts and all story without being too confronting, while trying to impart to some of our most vulnerable, the dangers of living on the edge.

Shirree Turner wasn’t into drugs and alcohol, just a social drink and an odd puff of marijuana. But Ken concedes she was perhaps looking for love in all the wrong places, and frequented the Adelaide city nightclub scene.

On Saturday, June 5, 1993, dressed up she headed into town for a girls’ night out. Later, after a few too many drinks, and separated from her friends, she accepted a lift from a stranger.

What happened next was described by hardened detectives as the “most horrific and brutal murder”. Stabbed repeatedly and left to die, Shirree staggered 90 metres to a house to get help, but unfortunately no one was home, and she was found dead on a stranger’s doorstep in the morning.

“No words can express the sorrow of seeing Shirree’s body on the morgue table,” Ken said. “I’d warned her to keep away from that social environment, and pleaded with her to stay away from the drug and alcohol scene. Unfortunately, she used alcohol as a painkiller.”

It would be two years before detectives received a break through on the case, resulting in a man with a long criminal history being arrested and charged with Shirree’s murder. After being extradited from Melbourne, where he was already serving time in jail, he was committed for trial. The accused, however, was acquitted in March 1998, the evidence deemed largely circumstantial, and witnesses unreliable.

Ken then launched ground breaking legal proceedings in the civil court, charging the man with the wrongful death of his daughter (very similar to the O. J. Simpson case) but later withdrew the action due to ill health.

Ken, and his wife Jenny, has established “Crossroad Connexions”, a non-profit organisation, aimed at schools, colleges, youth groups and the corporate sector.

“Crossroad Connexions was borne out of a desire to bring awareness of safety to the public at large, particularly teenagers and young adults, and communicate to them about the dangers of living on the edge, their vulnerability when they choose to live life in the fast lane.”

Preferring to turn the tragedy into something positive, he has co-written a book “Halfway to Justice” with cousin, Lesley Turner, and now works with Jenny presenting the life awareness program.

“She would have wanted me to tell the whole story to help others, that’s how she was — always thinking of other people first.”

He and Jenny’s program is so new in fact, that the three schools which heard last week’s presentation — Maitland Area, Minlaton District and Yorketown Area — were the first in the state to take part in the program.

“You think you’re safe, but you’re not, and I realise you can’t walk around in fear, but just be careful and take care of one another, and always be aware,” Ken urges.

“And are guys safer than girls? The answer’s no. You are all precious, I beg you to take care of yourselves and your friends, and listen to your parents.”

If the reaction of students attending the presentation at Yorketown Area School on Friday is anything to go by, the couple’s message is going to have a huge impact.

There was none of the restless distracting movements sometimes seen. You could have heard a pin drop. And when his musical tribute, “Daddy’s Little Girl”, was played and photographs of her life were shown, students wept openly, and it certainly sent shivers down my spine.

One student, moved to email Ken and Jenny, said she always knew the risks, but by actually hearing a father talk about how much he loved his daughter, and explain what happened, definitely made her more wary of everyone, whilst saying it was the most beautiful and heartbreaking story she had ever heard.

Another emailed it was an enlightening presentation into the darker side of partying.