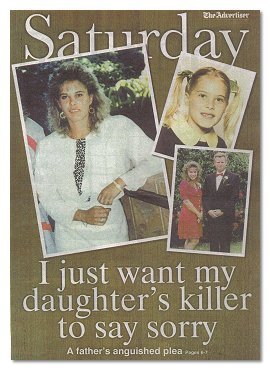 Ken Turner’s life changed forever when his daughter, Shirree, was brutally murdered after a night out with Friends. But, as he tells Nigel Hunt writing his own story has helped him to forgive…

Ken Turner chooses his words carefully. Slowly massaging his brow, he calmly and concisely articulates his only desire from the man he believes killed his daughter, Shirree.

“An apology. Just a simple apology”, he states. It is clear that the traditional emotions harboured by most victims of crime – initially anger, followed by revenge and retaliation – have no place in Mr Turner’s life.

In a move most people would find hard to understand, he chose to forgive Shirree’s killer in the days after she was brutally stabbed and left to die in Oaklands Park reserve.

His strong Christian faith and the firm belief his life would be consumed with negative emotions if he did not forgive were responsible for his unorthodox move. In casting the negatives aside, Mr Turner embarked on a proactive quest, initially to ensure justice was done for Shirree and now to see that something worthwhile arises from the tragedy of losing his only daughter.

The murder of Shirree Ann Turner, 22, in June 1993, remains one of South Australia’s most sensational and talked-about cases for a number of reasons.

The case had it all – a beautiful young victim, the seedy side of Hindley St, a highly publicised police investigation which stalled and then delivered the goods with the arrest of petty criminal and convicted sex offender Frank Mercuri, and then a Supreme Court trial which say Mercuri acquitted of Shirree’s murder. Then came the OJ Simpson-style civil action launched by Mr Turner against Mercuri. The suit was abandoned on the first day of the trial.

Throughout his ordeal, Ken Turner, 55, documented every step, every twist and every disappointment. Next month, Halfway to Justice will be published. (Book released on March 9th 2005).

Written by Mr Turner and his cousin, Lesley, it is a warts-and-all journey through his nightmare from day one. It details the police investigation, the murder trial, his bold move to take civil action against Mercuri and his heart-wrenching decision to abandon it.

It also focuses on the long-term plight of those affected by the murder of a loved one – an aspect quickly forgotten by the public once a case is no longer in the spotlight.

Several chapters will immediately ignite debate within the legal community.

Mr Turner’s firm belief that legislative change is needed to allow the prosecution to use similar fact evidence against a defendant will attract support and scorn.

In the book, Mr Turner describes his feelings when he learned, during the murder trial, that Mercuri was in jail in Victoria for raping and stabbing another woman when he was arrested over Shirree’s murder.

“I just went into absolute shock, absolute horror”, he says from his Allenby Gardens home.

“It was much the same feeling as when I had to go to the morgue and identify Shirree.

“I could not believe he was in jail for raping and stabbing another woman and he was in there standing trial for Shirree’s murder, and the jury was not allowed to know about it.

“What the hell is going on here?” I asked. I had no idea about the similar-fact evidence rules. I didn’t understand it and, to this day, most people don’t.” Mr Turner says that when he recounts this to people they react with anger, while the lawyers and police just shrug in acknowledgment.

Following the trial, one of the jurors said that had the jury known of Mercuri’s past, it would have given a guilty verdict.

Such a statement is testimony to the volatility of similar-fact evidence and may; only serve to reinforce the arguments of those who do not favour its use.

“I can see that, but how much more similar do you need when he has been convicted for raping and stabbing another woman?” Mr Turner says. “If that is not similar for propensity then can someone explain it to me? I am confused. “You can take it from a legal point of view and see it through their eyes, but what about seeing through the victim’s eyes, through the father’s eyes?

Mr Turner’s pledge of forgiveness of Mercuri may seem hollow to some, given the fact he continued to peruse him in the civil court after he was acquitted in the Supreme Court.

“That is one perception. But I was driven by the pursuit of justice,” he says. “If someone wants to take the view I was doing it out of revenge, that is not what my heart is telling me. “We are able to bring a perspective through the book about what happened and why.

“People can read it and make up their own minds as to what they really believe could have happened or what should have happened. “It leaves an open-ended question as to whether I pursued Mercuri for revenge or justice and there is a big difference between revenge and justice.”

Mr Turner knows he has been robbed of a wonderful relationship with his daughter.

It is a path he often treads when he ponders her likely future, had she chosen a different route down Hindley St that fateful night. Flashbacks are common, triggered by various smells, sights and sounds. The sight of a mother and child happily playing often brings sorrow.

“You walk through the channels of your mind that is never going to happen to Shirree,” he says. “You miss them more now than then.” 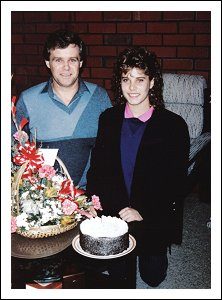 To this day, his lasting memory of June 6, 1993, is of identifying Shirree’s body in the city morgue.
He vividly remembers walking down a dimly lit corridor to view her body, flanked by detectives, heart pounding and mind in denial, hoping the body at the end was not her.

“It’s like you are walking down the road to eternity. It takes so long to get down that corridor,” he recalls.
“It is something you can’t describe accurately. You have to live through it.”

Besides losing his relationship with his murdered daughter, the personal and financial cost to Mr Turner has been high. His second marriage disintegrated as a result of the murder case and stress has been a frequent visitor.

Last month he married again – to long-time friend Jenny, 47 (Married Jan 28th 05)
While he believes the system dealt Shirree an injustice, he has nothing but praise for the way police investigated the case and the manner in which former Director of Public Prosecutions Paul Rofe, QC, prosecuted it.

Both were honest with him, perhaps too honest in division the case against Mercuri was not strong and relied entirely on circumstantial evidence and the testimony of several unreliable witnesses. ” I don’t think they could have found any more evidence, even if they continued to investigate,” he says.

Mr Turner can remember one pre-trial meeting with Mr Rofe at which he indicated he might not proceed because of the lack of evidence. He believes his reaction to this may have been responsible for Mr Rofe’s decision to proceed, even though the case was weak.

“It obviously had an effect on Paul. I think be could see my grief, my heartache and my desire,” he says. “I think, out of a great compassion that lies within that man, I think I swayed him. “Looking back in hindsight, which is always easy to do, he was right.”

Mr Turner believes many things conspired to ultimately torpedo the case against Mercuri – foremost among them the passage of time from the murder to when the informant contacted police nominating the suspect.

Mr Turner’s motive for embarking on Halfway to Justice can be viewed in many ways.

There is no doubt it will raise awareness of the justice system and it’s many weaknesses from a victim’s perspective.

But it can also be seen as part of his continuing healing process and his quest to ensure some thing positive comes from his daughter’s death.

Shirree Ann Turner, 22, was fatally stabbed at an Oaklands Park reserve in the early hours of Sunday, June 6, 1993. Two girlfriends told detectives they last saw Shirree in the Charles Sturt Tavern, in Hindley St, about 10.30pm on Saturday, June 5.

The friends went off to dance, leaving Shirree holding their handbags. When they returned, she was gone. Witnesses told detectives she had been in Hindley St and Rundle Mall until 3.10am on Sunday, June 6.

At 7.50am her body, was found at the front door of a house in Minchinbury Tce, Marion.

Detectives believe that after being stabbed, Shirree dragged herself to the house in search of help.

Police investigations continued for some time but stalled – despite the State Government offering a reward of $100,00 for information. In September 1995 an informant contacted police and provided information that nominated 26-year old career criminal Frank Mercuri, pictured, as the man who murdered Shirree.

The informant said Mercuri had returned to a unit near the murder scene and told two friends he had stabbed a girl after becoming involved in a fight with another man.

In October, 1995 an arrest warrant for murder was taken out against Mercuri, who was serving a jail sentence in Victoria. At his Supreme Court trial in March, 1998 the two witnesses’ evidence did not support the prosecution case. On March 17, 1998, Mercuri was acquitted of murdering Shirree Turner.

Several days later it was revealed Mercuri was serving a four-year jail sentence for the attempted rape and stabbing of a woman in Melbourne. In that case Mercuri picked up a woman on New Year’s Eve 1994, took her back to his hotel room, where he attempted to rape her and stabbed her in the chest.

In September 1998, Ken turner lodged a civil claim against Mercuri for wrongful death. In October 1999, on the day the civil trial was to start, Ken Turner dropped his action….