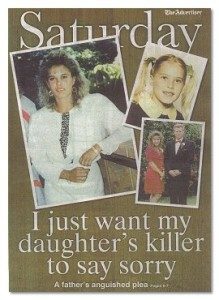 The alleged Killer of Shirree was arrested in 1995 some two years after she was murdered.

He was serving a sentence in jail for another crime in another state when the police arrested him. He had been convicted for attempted rape and of intentionally causing serious injury (by stabbing) of a young women. The maximum sentence for these crimes could have seen him in jail for a total of 27 years and 6 months, he was sentenced to four years with a non-parole period of 33 months even though the Judge was aware of 48 previous convictions.

It took almost another year for his extradition to South Australia to stand trial for murder. That trial took place in 1998 nearly five years after the crime was committed. A jury in the Supreme Court found him not guilty and acquitted this man because of lack of admissible and credible evidence. He denied that he killed Shirree and still maintains that he is innocent. However, I and many others, hold a firm belief that this man was indeed responsible for killing Shirree.

The jury at the Supreme Court trial was not allowed to know certain facts about the previous criminal history of this man. The two main witnesses did not come forward voluntarily with their evidence, but were found by police after an anonymous tip-off some two years after the murder. They testified reluctantly, thus creating “reasonable doubt” in the minds of the jury. In the pursuit of justice I was advised to initiate a Civil Court action charging him with the wrongful death of my daughter. This action was compared to the O.J. Simpson case form the United States of America.

The police in more than one state believe that this man is a career criminal, as stated previously, he had been convicted on at least 48 previous occasions and had spent much of his adult life in prison for some of these crimes. He apparently has no regard for anybody else and due to an unfortunate upbringing seems to regard it his right to take out his own brand of revenge on society.

Our court system does not always get it right, and in this case the “Propensity Law” allowing similar Fact Evidence into court was not used because it was deemed that it was not applicable in this case. It is an unfortunate fact that this type of evidence is very rarely used in our courts. However the burden of proof in a Civil Court is different from a Criminal Court. In a Criminal Court the onus is on the prosecution to prove guilt “beyond reasonable doubt” but in a Civil Court the burden of proof is considered on the “balance of probabilities”.

In seeking justice I learned that true justice was not possible in this case. The Civil Court would not have been able to dispense justice of any description because this man could not afford a lawyer and so decided to represent himself. A Judge could not have delivered a just decision and since the whole process was becoming farcical, I decided to drop the action.

All legal avenues have been completed and I am content to leave justice in the hands of God. The law of man requires that certain processes must be undertaken through the courts and it is not wrong to seek justice, but when this process fails as in this case we must be able to move on with our lives, and learn to cope with the disappointments of this world, not being able to forgive this man would have bred bitterness, anger, resentment and many other destructive emotions in me. And what would that have accomplished?