Wednesday 9th March 2005 saw the culmination of six years of hard work. The long awaited book depicting my anguish at being told that my daughter Shirree had been stabbed to death and the journey thereafter is now a reality. Halfway to Justice has been published by New Holland Publishers and is now available from most bookstores Australia wide.

On Wednesday 9th March “Halfway to Justice”, written by my cousin Lesley, was officially launched by Dr Rick Sarre, Legal Commentator at the University of South Australia who very kindly wrote the following acknowledgement in the book. 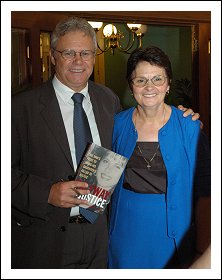 This book questions how the criminal justice system can be said to deliver justice to victims given its failing and perceived inadequacies in the circumstances described in this book. Yet the answers and preferred options are not always self-evident. What we can find in this tale is something of the true human spirit, both in Shirree’s will to live and her father’s desire to seek true justice for his daughter. I admire his strength in the telling of his story.’ 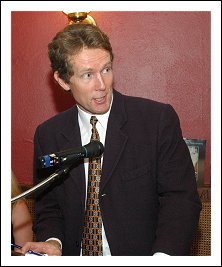 Sarre told the one hundred or so guests at the launch that the book was not a lament or a vehicle for self pity but that it was the story of my journey ‘through the shock of the news on that fateful day in June 1993, through forgiveness of the perpetrator, and the torment through the eventual criminal trial and acquittal of the accused, followed by the aborted civil action’.

‘Nor is the book a swipe at the legal profession and the law generally. It is not titled “A Shocking Injustice” even through there must have been times when Ken and others might have thought that title fitting. No, it is called “Halfway to Justice”, with the idea that there are some ways in which the law, its personnel services, its procedures and its vehicles for communication to victims could be improved. Who would not feel frustrated when, for example, it took the wheels of justice 12 months to turn just to get a suspect extradited 800 kms from Melbourne to Adelaide? Those who have had anything to do with civil litigation, too, will sympathise with the picture painted by Ken of a system bedevilled by delays, adjournments, costs and consequent frustrations.’

Dr Sarre spoke about the fact that I was not complaining about the legal system or its professionals, but rather that the rules of evidence as they apply to similar acts perpetrated by an accused should be allowed to be presented to a jury so that they can arrive at a fair and just verdict. He gave the current reasons why a jury is not permitted to know certain facts about an accused person.

‘But it is one thing for a calm, dispassionate legal professional, Attorney-General or commentator like myself to cite the good reasons for the rules. It is quite another to live the frustration of knowing things about an accused person that the jury does not know. Ken explains his personal angst with compelling passion. He wants the rules modified, if not by judges then by parliament. The book will ignite further debate on this issue I am sure.’

Dr Sarre spoke of the difficult legal conundrums and emotional roller coaster ride that I faced while attempting to pursue justice through the civil court stating that commentators are reviewing the current trend of using civil courts to obtain criminal justice with interest. The book provides excellent content for the continuing debate he states.

‘Ken wrote this book for a number of reasons, each of them to ensure that something worthwhile emerged from the tragedy. It was written as a tribute to his daughter; it was written as a way of communicating the effects a murder has on those left to grieve; it was written as a means of prompting some serious thinking in legal circles about needed reforms to the criminal and civil justice systems; it was written as a vehicle for sounding a warning to other young people who might find themselves in the same dangerous circumstances. But the reason that resonated most with me was his desire to give hope to other victims of vicious and senseless crimes so that they could come through their experience with sanity and dignity. In that respect, Ken deserves our acclaim and our profound gratitude.’

The Attorney-General, Mr Michael Atkinson, accepted my invitation to speak on behalf of the government. Nigel Hunt, journalist for the Adelaide ‘Advertiser’ reported on what he had to say in his speech.

‘The extraordinary story points out flaws that still remain in our understanding of the needs of victims, especially the surviving families of murder victims.

The criminal justice system and those who work in it have a responsibility to ensure victims are treated with courtesy, respect and sympathy and with proper regard to their needs.

I commend the book to you. It is an honest account of a tragic case but it also reminds us that victims and survivors want to be treated with respect, to be listened to and heard and to have a voice in key decisions that affect their cases, as well as their lives.’

Mr Atkinson said that the book launch was not the venue to discuss the “legal complexities” of similar fact evidence pointing to a Court of Criminal Appeal decision dealing with such evidence. 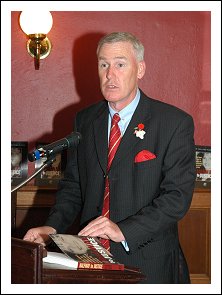 The court heard that, although there was no suggestion of a unique signature accompanying each murder, the jury was entitled to compare the circumstances of each murder and ask whether, as a matter of commonsense, experience and judgment, there is such an underlying unity between the murders that it led to the conclusion that the same person or persons were responsible for each of the murders.

It seems to me that this takes us in the direction for which Ken argues, although it certainly does not go as far as he recommends.’

Mr Atkinson also spoke about the possibility of looking at the ‘double jeopardy’ rule where an offender cannot be tried in a criminal court for the same crime after an acquittal even if compelling evidence surfaces at some future time.

Lesley then spoke about her journey through the writing of the book and I took the opportunity to personally thank the many people involved in encouraging me from the birth of the idea of having the book written through to the preparation and publication of “Halfway to Justice”.

Fiona Schultz, CEO of New Holland Publishers, at the conclusion of the formalities, invited those present to continue to enjoy the evening. Food and refreshments were provided by New Holland and there was opportunity to purchase the book. 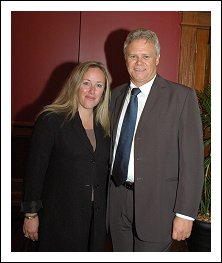